Dear friends of the port of Kiel,

The year 2020 clearly had room for improvement, 2021 was already better, and 2022 will be really good again. That is my wish for you and for us. Despite a perceived permanent lockdown and still existing challenges and uncertainties, I am optimistic for 2022.

Together with you, we have always adapted very well to changing situations – and with a very professional composure. We will manage this cooperative partnership well again in the coming year. We had a good cruise season in 2021 under the circumstances. Our cargo business is strong. We continue to work on our projects. Some of them we present in this newsletter. You see a new normality at the seaport – prepared for whatever may come, but also confidently planning for the future. I am proud of our colleagues and staff, we want to offer you excellent service again in 2022.

In this spirit, I wish you and us a good start into the new year!

The PORT OF KIEL has set itself the goal of reducing all of its carbon dioxide (CO2) emissions to zero by 2030. The path to climate neutrality is described in a three-step plan that puts the port's BLUE PORT concept into concrete terms. The port's three-step plan envisages covering 60 percent of the energy requirements of ships calling at Kiel with green electricity as early as next year. By 2025, this figure is expected to reach 80 to 90 percent, before climate neutrality is achieved for all activities of the PORT OF KIEL in 2030 through the interaction of a wide range of measures. The PORT OF KIEL already avoided more than 6,200 tonnes of CO2 in 2020 Dirk Claus: "We have created the infrastructural basis so that ferries and cruise ships can berth in the city port without emissions and are starting with the construction of an on-shore power plant for the Ostuferhafen as well." In order to make the processes at the freight terminals even more efficient, the Federal Ministry of Transport and Digital Infrastructure (BMVI) is funding the establishment of a digital test field in the port.

Operational processes are optimised and made more sustainable on the basis of a 5G campus network. In this way, climate-neutral growth in port handling is to be supported by innovative IT technology. The Federal Ministry of Transport and Digital Infrastructure (BMVI) will fund the establishment and operation of a digital test field in the Kiel seaport.

As part of the D-TECH-BASE project, port terminals for roll-on/roll-off traffic (Ro-Ro) will become test fields for the new 5G terminal communication and traffic control for the first time. Dirk Claus: "Kiel is a leader in the digitalisation of operational processes in RoRo terminals. With the support of the BMVI, we will further develop innovative solutions in process optimisation and networking within the framework of DigiTest. I am looking forward to the digital test field, which will enable us to operate even more efficiently and sustainably." The basis of the digital test field is the establishment of a 5G-campus network for fast data transmission, which is aligned with modern information and communication infrastructure.

Lars Gummels, Head of IT at the PORT OF KIEL: "The 5G network forms the decisive infrastructural basis for the implementation of further digitalisation measures. Various hardware and software components will build on this to improve terminal communication and traffic control." Within the terminals, tagless optical unit tracking, an innovative trailer tracking system, will be used. A fleet management system is also planned, which will enable the connection and scheduling of all forklift trucks at the terminals in real time via Smart Connect. The project, worth about 1.75 million euros, focuses on the Ostuferhafen and Schwedenkai and will be in effect for a good two and a half years until 30th June 2024.

For the ninth time, the State Capital City of Kiel is awarding the Building Owner's Prize for outstanding buildings in the city area. A total of eight building projects were nominated for the award, which is presented every three years. The Advisory Board for Urban Design selected the extension of the cruise terminal (Terminal 28) at the Ostseekai as the winner.

Doris Grondke, Head of the Building Department, emphasises the high architectural quality of the building: "With this, the Seaport as the building owner has really achieved something exemplary. This time, too, the Building Owner Award has shown that there is a lot of room and many ideas for high-quality architecture in Kiel. With the award, we are setting a strong signal for building culture in our city."

The jury justified its choice of the winning building by stating that the extension to the cruise terminal on the Ostseekai was a bold, exceptionally attractive building that fully lived up to the standards of maritime Kiel: "Its emblematic, identity-creating architecture does justice to the special location on the fjord, which is visible from afar, in an exemplary manner."

In order to be fit for the future for the next generation of ships, we have started with the construction of two new and wider Ro-Ro bridges at the dolphin jetty. After completion of the work, berths 5 and 6 will be ready to handle two more large Ro-Ro ferries smoothly and quickly in the Ostuferhafen.

Both upgraded berths will receive shore power connections, of course with electricity from renewable sources. In addition, the tracks of the railway terminal will be made traversable for heavy loads. All construction work is fully on schedule. 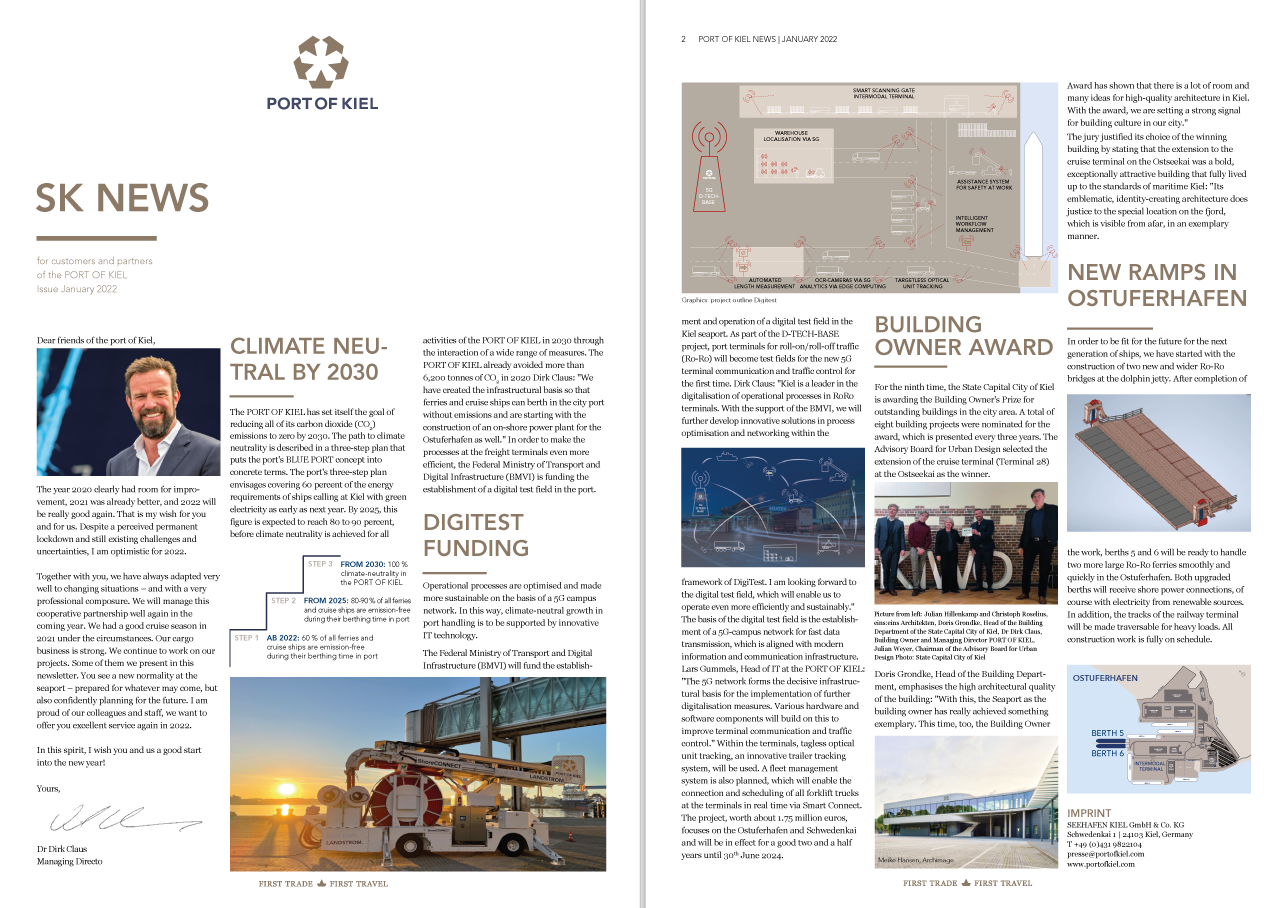